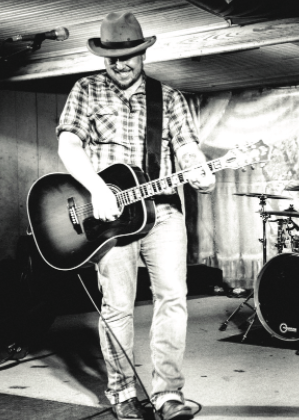 When Zack Walther went to college to major in music, he had to choose an instrument of study.” And—no accident—he chose his own voice. As a child of the 1980s he sang in the school choir and learned to play songs by ear on his brother’s upright piano, “But it was mainly the white keys,” he recalls. Then, as an afterthought, he adds, “It still is.” That piano may have been the first musical instrument he ever touched, but it certainly wasn’t the last.

By the time the ’90s rolled around, he was a teenager immersed in rock and roll and already a developing musician. That’s when he found his father’s old nylon-string classical guitar, long forgotten and stashed in the family attic. When he was 13, his folks, aware of his interest, bought him a basic electric guitar and a little Crate amp. Two years later, they surprised him on Christmas with his first quality acoustic guitar. “I played all through Christmas day,” he says. “Playing songs, learning songs, country songs, rock songs, just basic chords.” Still, he knew he was destined to be a vocalist—first and foremost.

“Singing was a natural thing for me, and it always has been because I’ve gone through college and actually been classically trained to sing.” He picked up piano and guitar on his own, and though he’s had a few lessons, considers himself self-taught. “There was always interest early on, very early, playing music and singing. And because I was the vocalist of my friends, I’ve always been the lead singer,” he says. “I can remember, at 13, 14 years old having band practice in my best friend’s garage.” High school was a whirlwind, “a lot of guys and girls creating bands.” Over the 30-year span of his musical life, he’s been in and out of bands, including, fairly recently, Zack Walther and the Cronkites, a name familiar to many aficionados of Texas music. An album—Ambition—arose out of that collaboration. In his current iteration of band names, it’s back to basics: The Zack Walther Band, a three-piece ensemble with guitar, bass and drums — with his  best friend and collaborator Matthew Briggs on drums.

Once the seeds were planted, Walther has just kept growing musically year after year, gaining experience, covering new songs and musical genres, until he evolved into the versatile performer that he is today. He’s able to deliver anything from the Beatles to Bruce Springsteen to Leonard Cohen to a whole catalog of originals, many of which make up the tracks on albums he’s recorded over the years. As a teenager, “The alternative rock scene was huge, and that’s what we listened to mostly. But I was also raised on my dad’s LPs, the Beatles. I had a huge, strong influence from Simon & Garfunkle. That was one of my favorites growing up. In fact, the first song I ever played in front of an audience was ‘Sound of Silence.’ And I still play it today.”

The versatility that defines his performances extends to a wide range of music that’s known by the vast majority of Americans regardless of background or regional differences. It’s a genre that’s come to be known as “Americana”—music that’s rooted in the heritage of the nation, from the English and Irish music of the earliest settlers’ to the blues and jazz of the old South and the R&B of Detroit. And Walther’s voice ranges as far and wide as his song choices. In his rendering of Leonard Cohen’s anthem-like “Hallelujah,” he can reach down deep in his throat to find a guttural howl and then soar up to highs that ring like a prayer. To watch him perform is to see a musician in his prime delivering straight from the heart.

And his growth as an artist never stops, as the Zack Walther Band expands its audience. A recent original, “Mustang Wine,” is, as he puts it, “a perfect example of the direction this band is headed.” Wherever Walther and his band are going, they’re doing it at breakneck speed, and for fans of that special kind of music you can only find in Texas, they can’t wait until he gets there. – G. C. Larson 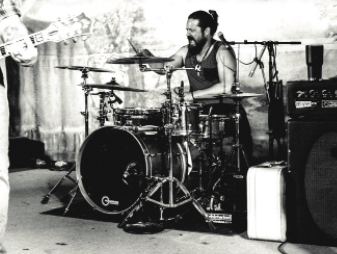 If you’re lucky enough to catch the Zack Walther Band performing live, you notice one thing right away: In most bands, the drummer’s sitting on a small stool surrounded by a whole bunch of drums. But this guy’s standing up, and he’s got just that one snare drum. Plus, if you get closer, you pick up on something strange: his bass pedal is beating on the side of an old suitcase. Yep, you’re looking at Matt Briggs, and his evolution from a kid playing on a second-hand drum kit to his emergence today as a musical force to be reckoned with is sure to become part of Texas music lore.

Briggs’s Father was a police officer, and his Mom taught school, but neither of them had a musical background. Although, he recalls, “My mom kinda sang in the church choir, stuff like that.” He was actually born in New Braunfels, but soon after that, the family moved down to the coast, and he spent his formative years in West Columbia (population 3,905). The town had a place in Texas history, having served as the state capital for a time back in 1836, but Briggs says, “It was a small town, and it took about four neighboring towns to get one school district … growing up all we had was a Walmart.”

His Dad loved to snag a bargain at pawnshops and yard sales (“you know, the pack rat kind of guy”), and when he came home with a surfboard one day, Matt and his best friend Zack Walther learned how to ride it. Then Zack’s dad bought him a guitar for Christmas, and Matt’s Dad came across a drum kit; it was a foregone conclusion that they would join forces. By then, the two friends were freshmen in high school and started practicing in a garage, doing “Green Day and Pearl Jam, stuff that was cool in the ‘90s,” he says.

In the beginning, when he had nothing but an old pair of used drumsticks, he’d beat on anything—pots and pans, the top of a barstool—drums were his “passion.” But the junior high music teachers had different ideas. “You walk in there and they sit you down, see if you can hear different tones. They see what your lips look like and see what instrument you’d be good at. And they asked me, ‘Matthew what do you want to play?’ and I said, ‘I’m here to be a drummer.’ I wanted to play drums so bad.”

But the school had a different idea: the saxophone. “I’m glad I did it,” he says, looking back. His Mom came up with a hundred bucks for a used sax, and he played it for six years. “I learned all the music theory, the notes and the notation side of things. And rhythm.” Then a cymbal player got sick, and the marching band needed that cymbal, so he raised his hand and volunteered. He marched with cymbals for a season, worked up to drums, and continued marching in college when he attended Southwest Texas in San Marcos. “So I had to sneak my way into drums,” he says with a laugh.

Today he shows up with that suitcase modified with a bass drum pedal, a single snare drum and cymbal on a stand, plus a little tambourine, which serves as a hi-hat (normally a pair of cymbals operated by a foot pedal to open and close). “I have gone through a really minimal kind of way of thinking and playing music,” he says. That minimalist style has become his trademark, and it merges with the mindset of the band as well.

By the time they were in college, the two best buddies had started thinking about making some money in music, and they opted for top-40 country tunes (“like your Tim McGraw, Kenny Chesney kind of stuff”), playing dance halls and bars. That lasted about three years as they traveled around Texas, but toward the end of college, as he recalls, “Zack and I just looked at each other, and said, ‘You know, we could write these songs.’ We could perform and write the stuff.”

By now, things were going pretty well, and the band started traveling, doing college stops in Lubbock, Austin, Houston and others. Briggs marvels today at the Texas music genre: “There’s a Texas scene here,” he says. “It’s got…it’s like its own beating heart here.” And the band has matured with time as they’ve performed an increasing mix of original material along with the covers. On the college circuit, they had the time and opportunities to evolve into what he describes as “this Americana Texas music kind of thing.” And that’s what they’re still doing today. “We really like doing our showcase,” he says. “We like going into a place with a listening room or where we’re playing on a bill with a bunch of bands—that’s kind of our thing. That’s what we want to be known as—we want to be known as artists.”

He didn’t go to college initially for a music degree. “I actually went for a studio art degree, emphasis in painting.…I thought I was going to be a school teacher,” he recalls. “I thought when the music career folded, that’s what I was going to end up doing. I was just going to switch over to a nice life with a regular job with benefits.” He went to Kingsville A&M near Corpus Christi to get his Masters but never used his teaching degree until a couple years ago; today he gives private lessons to about 35 students. They stage informal recitals in which the students are pretty much free to come up and play, then mix with their friends.

“Zack and I, what we do is we show up with pride. When we go up there we’re singing our songs about things that we care about — songs about Zack’s kids, our wives, our work, our friendship, the business,” he says. “We have a great fan base, and they come out every week. Right now I’m going to be true to my art and do what I do, and if the people eat it up, that’s great. And if the people don’t, well, I’ll just keep working. That’s what me and Zack have always done.”